The Teachings of the Arica School present a body of philosophical, historical and theoretical Knowledge from Oscar Ichazo, found in a number of books, in introductions to training manuals, and in lecture videos, all of which have one purpose — to introduce a complete Theory, Method and Practice to enter and stabilize the State of Enlightenment (Theosis), for the benefit of all humanity. In the Teachings Oscar provides scholarly discourses about the history of Enlightenment and makes comparisons to his Integral Philosophical Teachings in order to clarify the differences between his Teachings and the major schools of Enlightenment throughout history. The Teachings of Integralism are based on a new scientific and integral understanding of how to attain Enlightenment in a single lifetime with realistic dedication and commitment. The Teachings are presented with Trialectical logic — the logic of cycles — so that the telos (purpose, finality, goal) of each Teaching is presented in such a way that we naturally evolve, resulting in a Higher State. 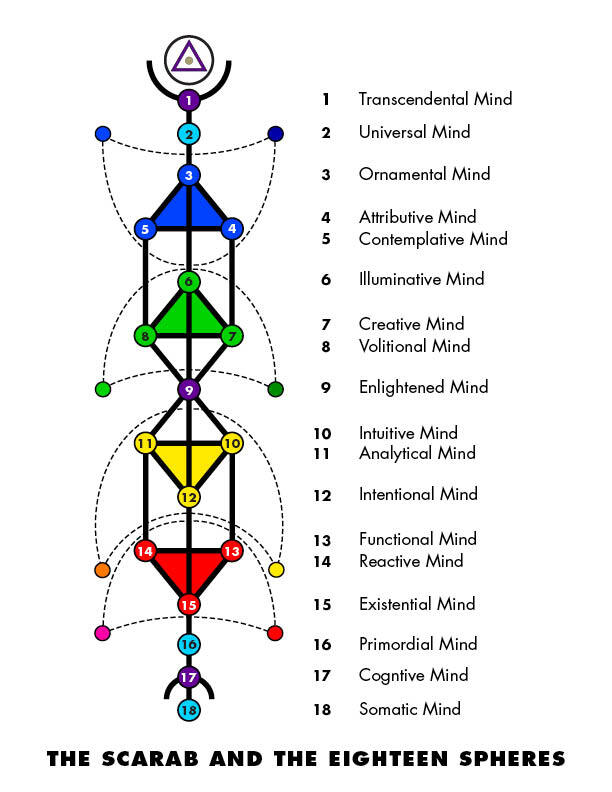 The total clarity of Oscar’s Teachings is shown in the precision of the presentation of both his written Teachings and meditational practices that embody the written Knowledge to contemplate the Higher States. The structure that integrates this body of Knowledge is called The Scarab. The Scarab is composed of Eighteen Spheres which are classified into five distinct realms of reality called the "Realms of Existence, Knowledge and Immortality." The Spheres that are numbered 18 to 10 in The Scarab correspond to the lower levels of the human condition, and the Spheres numbered 9 to 1 correspond to the higher levels, concluding in the Transcendental State. When the Integral Teachings and trainings of The Scarab are studied, embodied and offered for the benefit of all, the Higher States awaken as Knowledge unfolds. The presentation of both individual and group trainings or practices includes these Teachings.

The Relative and Absolute Minds

The nine lower spheres of The Scarab (Spheres 18 to 10) are the nine aspects of the Relative Mind, the Mind of Concepts and Language, and as such have specific methods of recognition, processes of clarification, and ways of transcendence. These lower Spheres include trainings such as the Fixations and Arica Autodiagnosis, Four Functions of Reality, the Levels of Consciousness, Doors of Compensation, and the Domains of Consciousness. The nine higher spheres of The Scarab (Spheres 9 to 1) open with the Enlightened Mind (Sphere 9) to establish the pure ground of Enlightenment upon the Absolute Mind or the Divine Presence as the integral or uniting point. It is upon the ground of Sphere 9 that the Minds up to Spheres 2 unite into the Integral State of Transcendence in Sphere 1, the Transcendental Mind. These Spheres represent the nine aspects of the Absolute Mind, the Mind of
Non-conceptualization. When the Absolute and Relative Minds are united, we enter
the Ornamental State of Enlightenment (Theosis).

Residential group trainings offer the presentation of chi-generating exercises, dietary guidance, meditation, and training in methods of analysis and the clarification of projections about one's life. However, the telos or outcome of all the group trainings and practices is the experience of being united with others across the State of Innate Awareness that is awakened, a wonderful "We are One" experience with all humanity. This is also true for the individual trainings and practices done at home. The Teachings and related meditations are based upon the solid ground of the Ethical State of Unity, the Innate Awareness.

Here is a short quotation from Oscar about the Integral Teachings of The Scarab: “Embodying and realizing The Scarab is a meditational practice of supreme importance in awakening our Innate Awareness of the integrality of our process as a human being in our union or Theosis with the Divine. This awakening prepares us to attain the State of Perfect Presence of the Absolute, Transcendent Divine.”