This introduction to Oscar Ichazo and the Arica School of Knowledge gives an overall presentation of Oscar and his Integral Philosophy (1956), a philosophy that completely analyzes a human being from the lowest levels of the ego to the Highest States of Pristine Enlightenment (Gk.Theosis). This type of school has been in existence since ancient times, from the Greek philosophical schools to the schools of the Hindu, Buddhist and Sufi traditions. As in all classical schools of knowledge, the Arica School offers a complete method of Enlightenment. What makes the Arica School different from the ancient schools is that it provides a contemporary method of Enlightenment, employing biology, psychology, physics, and modern knowledge in order to clarify the human process for the attainment of freedom and liberation.

‍‍Oscar, as the originator of Arica Integral Philosophy™, bases Integralism upon three metaphysical questions:
‍
What is humankind?
What is the Supreme Good of humanity?
What is the Truth that gives meaning and value to human life?

Since Oscar’s early adulthood, these questions were the basis for a lifelong quest to reformulate the Universal Truths that answer these questions through in-depth and scholarly research, investigation and experience in the fields of metaphysics, theology, theosophy, esoteric tantra, and mystical psychology. In 1956, Oscar formulated the principles of Trialectics™, the logical Laws of the Mind in the ‘process of becoming,’ and upon this foundation originated the Enneagramatic Theory of Protoanalysis based on the ‘doctrine of the Fixations’ and the structure of the human psyche, which is composed of nine Spheres of Existence (Spheres 18–10 of The Scarab™). This entire Theory was given the name Integral Philosophy.

In Integral Philosophy, the Work of the School consists of eighteen progressive levels of trainings, supported by group practices, which correspond to the eighteen Spheres of Knowledge of The Arica Scarab. From the point of view of psychic process and maturity through the attainment and opening of the different States of Being, The Scarab can be experienced systematically in its pre–established succession.

Oscar’s Teachings state that: “The purpose of the Integral Philosophy of the Arica School is to open the way to attain the Supreme Good of Enlightenment and Unity with the Divine for the benefit of all humanity.”

The Founding of The Arica School

In 1956, groups of people formed in major cities in South America to study the Universal Knowledge — including mystical insights, original philosophical theories, and the in–depth understanding of the human psyche — that Oscar was proposing. In 1968, Oscar founded the Arica School of Knowledge in Chile, and in 1969, he presented lectures about the Theory of Protoanalysis and the ‘doctrine of the Fixations’ to the public at the Institute of Applied Psychology in Santiago, Chile.

After completing what was called the "ten-month training" in 1970, attended by Americans who traveled to Chile to study with Oscar and discover the Mind by way of Protoanalysis, he moved to New York City in 1971. There, he and training teams taught his Theory and Practice to many thousands of participants through the Arica School. The Arica Institute was established in New York in 1971 to support the Arica School of Knowledge and those who teach and practice the Protoanalytical System and Method in group trainings. During the early years of the School, many Arica training centers opened worldwide to teach the Protoanalytical trainings, which are still presented today by Arica teachers through their sponsorships. Many sponsors organize monthly group practices in their communities of the Highest Work of the School. Over two hundred Arica teachers, a number of whom have been teaching since 1971, are certified to teach group practices and trainings. Oscar continued to lecture to a worldwide audience on history, logic, metaphysics, and theology. He published books, journals, letters to the School, countless newsletters, over fifty training manuals, and numerous articles — along with giving interviews — until his death in 2020. There is enormous interest in the publications of his Theory, which have had a far–reaching impact in academic circles internationally.

The Cultural Impact of The Arica School

The extent of the Arica Teachings internationally placed “Arica” in the Webster’s New World Collegiate Dictionary, Third College Edition, 1994, as a “technique or program for increasing self–awareness, consciousness…” In 1991, the United Nations Society of Writers (which “consists of members of the Secretariat, diplomats and United Nations correspondents who have published acknowledged works of literature, human thought and philosophy”) presented Oscar with the Award of Excellence “in appreciation of [his] role as philosopher, author and educator,” and invited him to lecture on the Arica Integral Philosophy at the United Nations in New York. Portions of his Theory and analysis of the functioning of societies were paraphrased in the Encyclopedia Britannica under the title “The State.”

The Five Tenets of Arica

As a body and depository of True Knowledge, the Arica School is fundamental to the alive Teaching and experience of the deepest States of Integral Philosophy found in the Teachings and is based upon five fundamental principles known as The Five Tenets of Arica.

1 UNITY OF GOD is based on the innate structure of the human mind which understands directly the First Principle of theology and metaphysics.

2 HUMANITY–ONE is the total unification of humanity by the inevitable historical perspective of humanity’s need for survival which depends on its unity — a unity that can only be founded upon transcendental ethics and the attainment of the Objective Love by which society will be transformed into a higher evolved state, a Metasociety, that is One Body and One Spirit. Thus, the Arica motto, “We are One.”

3 SCHOOL OF KNOWLEDGE is the fundamental mystical ground for the possibility of transcendence on the basis of Humanity–One.

4 OBJECTIVE KNOWLEDGE is based on Trialectical Analysis, in which the nature of human existence as a whole is proposed as a Knowledge that is Objective (Gnostic Truth) and beyond the personal subjectivity of the individual.

5 INTEGRAL PHILOSOPHY is the integration of the thirty–six functions of the mind and eighteen Spheres of Knowledge with absolute Transcendence, which is the union of the nine Divine Minds into Theosis.

The Roots of Buddhism and Arica Integralism

Oscar has said that “in order to understand the originality of the perspective of the Arica Integral Teachings, it is important to remember that Buddhism is based on the epistemological and immediate discovery or knowledge of the world as being fundamentally in a state of suffering (Skt. samsara). This is the First Noble Truth. What the Arica Theory proposes is an ontological foundation with the discovery that one step behind suffering, we find the actual root of that suffering, and this step behind discovers, answers and defines the ontological proposition that there must be a being, an Ego–entity, that supports that suffering.”

From this ontological foundation is established and derived four other modes of Being, forming all together five ontological realities. They are known in the Integral Philosophy as The Five Supreme Determinants. The entire Protoanalytical Theory, System and Method originates primarily from these Supreme Determinants, without which any study of the enneagrams of the Fixations and psychological types becomes groundless, without foundation.

‍1 THE EGO–SELF DETERMINES THE EXPERIENCE OF SUFFERING.

‍4 THE NINEFOLD PATH DETERMINES THE WAY TOWARD SELF–REALIZATION.

The Mantram of The Arica School 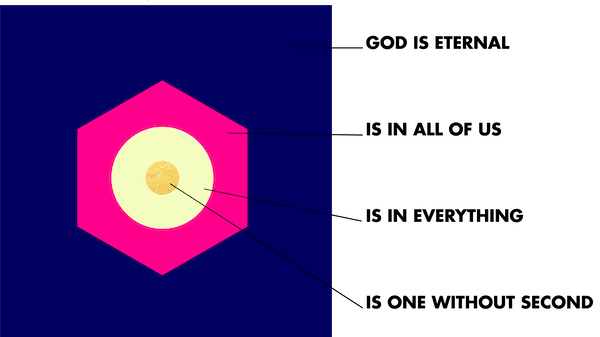 Because the Arica School is founded on the principle of the similarity of the process of existence in all human beings and because we all participate in this innate, unborn Eternal Principle, Arica considers every human as naturally belonging to the same body and spirit of Humanity-One. This is the fundamental basis for the School’s democratic principle of participation. This is also the basic principle underlying the School’s Integral Ethics, because the Arica School envisions humanity with the secure and conclusive destiny of becoming unified as one body, one spirit.

To enter the Arica School, one should recognize and understand the Five Tenets of Arica.

To become aligned with the Arica School, you need to declare the Arica Declaration of the Unity of God aloud, either:

1  In an Octagon meditation group, which represents the School in its totality — past, present and future.

2  In front of a practitioner of the Arica School.

3  Alone, crossing your hands left over right in the center of your chest, feeling the Declaration in your heart.

In any of these three forms, your integration with the Arica School is complete. In any case, the third possibility — of performing the Declaration alone — is essential, because respect for secret participation and privacy is an absolute affirmation of the Arica Principle of Freedom. Though entering Arica is a simple ceremony, it does open a connection between us and the School of Knowledge. Because the School of Knowledge is transcendental, beyond matter and time, it connects us also with our Eternal Continuum. This is to say that entering the Arica School becomes engraved in our Eternal Continuum with the force of all that is Transcendental and Divine that may become actualized in a human being. For this reason, it is an experience of enormous force, which will be felt in the center of the heart as an experience of happiness, accomplishment and bliss. Our heart will rejoice in unifying with the heart of Humanity-One, whose actual vehicle is the Arica School.

The Arica School welcomes all those who are interested in understanding their human condition and who would like to experience the Higher States of Mind that are the birthright of every human being. We welcome you with an open heart, since the Teachings of the School are offered for the benefit of all and the realization of a united humanity, Humanity-One.